How Do You Sleep At Night?

A good friend and loyal supporter of Mormon411 sent this in. To those who actively cover up the lie: how do you sleep at night?

There's so much about the Mormon church that proves it false, proved it's founder was a liar, cheat, con-man, and pedophile. I don't think it would be a far stretch to say that the man hours and cost that has gone into covering up the information above is incalculable. It got me thinking. It's easy for TBM's to say it's the evil one putting all these lies out there. The adversary has polluted the minds of men. I believe they say this in part because of fear. Fear not only that their faith is wrong, but what being wrong really means:

I'll break it down simply: The leadership of LDS Inc. would never get their hands dirty. No that would never do for men of god. (Sarcasm intended) It would be much simpler to have others do it, others with a vested interest. Others that would stand to lose everything if it ever came out that they helped cover up the truth.

It's these "others" that fascinate me.

When profiling a crime, detectives try to get inside the mind of the criminal. Well, I would say what these "others" do is absolutely criminal. Can anyone imagine what it must be like to cover up something that proves your faith false? Not just your faith, but the faith of your family and your ancestors, some of whom may have given their lives for the church? How do you cover up something like that and still look your family in the eye? How do you still look at yourself in the mirror? How do you tell your children to say their prayers before bed? What must you think about the afterlife? It's not like these others can just quit and go to another church.

These others must literally live their whole lives with the knowledge of what they've done. And if they are okay with it, what kind of person is that? And just think all you TBMs out there, that's the worst kind of person: a fanatic. Cults love fanatics; they'll do anything. Just ask the Manson family.
1 comment:

Documentary on the Jehovah's Witness Religion 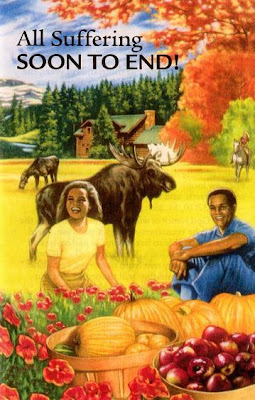 I just finished writing the last post about JW's and happened to find that, on my front porch, was a tract that they just left today. As you can see from the picture, they claim that the end of the world, as we know it, is near. All the wicked will be removed from the earth, the earth will become a paradise, and mankind will live in immortality forever.

The JW's have predicted the end of the world before. They were even stupid enough to predict certain dates. The first was 1914. Then 1925. Then 1975. Of course, they were wrong every time. It looks like they finally learned their lesson by not including any specific date this time.

I found a documentary on YouTube about an hour long on the JW's. Since I'm already on the topic, I might as well share it here. It's a pretty good documentary but unfortunately at the end, they put in "pro-Christian" crap.

A Discussion About JW's and Why Religion Is Stupid

Yet another religious discussion with my TBM wife was the inspiration for this post.

It began when I got online and watched a documentary on the history of the Jehovah's Witnesses. My wife walked in just as they were talking about how the JW's are forbidden from participating in holidays, birthdays, voting, politics, etc.

My wife made a comment to the effect of, "What do birthdays have to do with religion?"

Being the analytical minded person that I am, that set my brain into a series of thoughts:

To the JW's, attending a birthday party is as offensive an idea as temple garments being put on public display is to a Mormon.

I asked her, "What does underwear have to do with religion?"

I don't remember the whole conversation but it basically went something like this:

It's amazing to me to see how easily someone can recognize the very obvious problems with a religion that is not theirs. It's easy for a Mormon to see how the JW belief of birthdays is just stupid. So why is it so difficult for other people to see the very obvious flaws in their own religion?

You see, it was very obvious to my wife that there is nothing wrong with a birthday party. But when I point out that, like birthdays, underwear has nothing to do with religion, she immediately puts up the defenses and rationalizing.

People all over the world believe in some really strange and bizarre shit! Why? Jesus is no different than Superman: both are great stories. But ONLY stories. Hell, they both even wear red capes!

When you think about the need for a saviour it really starts sounding retarded. How did dying on a cross (or a stake as the JW's believe) save all of humanity? It's stupid. If god is all powerful, why did he have to resort to human sacrifice in order to make his plan come together? If god didn't want Adam and Eve to eat the forbidden fruit, why did he put it right in front of them? How can a stupid apple upset the great and perfect plan of the creator? How can eating a piece of fruit suddenly make you know right from wrong?

Yes, god is pathetic. The whole story is way too far fetched to be the literal truth.

But people believe it. I can't figure out why for the life of me.
1 comment: