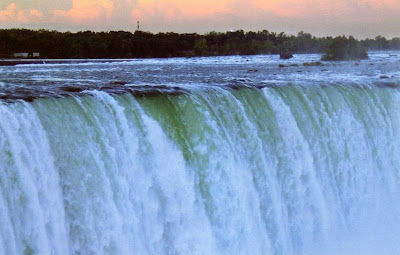 For this last Christmas, I received, from a concerned family member, the book entitled: Why?: Powerful Answers and Practical Reasons for Living LDS Standards.

I thumbed through this book expecting to find what the title suggests... practical reasons; however, it's just full of more Mormon propaganda... "Because the prophet says so. You don't want to disobey a living prophet, do you?"

For example, on page 14, a picture is shown of a lovely river with a beautiful sunset in the background.

Just below that picture is an identical picture, however it has not been cropped and the river plunges into a deadly waterfall.

The analogy, poorly attempting to be made, is that we, as normal people, have only a limited view of our world. What appears to be beautiful might actually be deadly. Only a Mormon prophet can see the "whole picture". The prophet can see the deadly waterfall and can warn us of danger. If we heed his word, we will be safe.

I bet you know what I am going to say next...

The recent earthquake in Haiti has leveled cities and killed people by the hundreds of thousands. Where was the prophets warning? Where were you, Thomas S. Monson, to warn the world of the danger that only you can see? No doubt there were LDS people living in Haiti and no doubt some of them died. Where was the prophet's voice of warning to the faithful tithe-paying, garment-wearing LDS people living in Haiti?

You have failed them, Thomas S. Monson. Shame on you! False prophet!

What natural disaster has any Mormon prophet ever correctly predicted?

Religious people view natural disasters as gods way of giving us a "wake up call". Non-believers see it as simply plate tectonics. God isn't punishing anyone. The earth has been having earthquakes and violent storms for millions of years and it has nothing, whatsoever, to do with human habitation or god's wrath.

If you think that I am exaggerating the LDS belief that prophets can literally see and predict the future, then consider this image that I scanned directly from page 15: 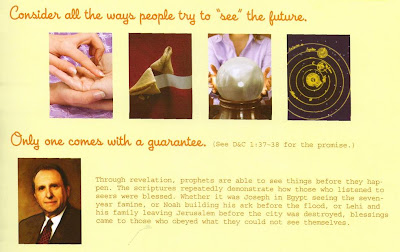 Prophets are guaranteed to be able to see the future. So then how come they never do? Where was Hinckly during the tsunami and Hurricane Katrina? Where was Monson during the earthquake in Haiti? Why couldn't the prophet foresee the impending attack on the World Trade Center on Sept. 11, 2001?

Notice how they do give examples of prophets predicting the future (including natural disasters) from the scriptures. But in a fictional work, it is easy to have your character do amazing things. There is not one example from any actual living and breathing Mormon prophet. Not one. In fiction, it is easy to predict the future. In real life, it isn't.

If prophets are guaranteed to be able to predict the future, then...

The only evil that has been revealed lately are those deadly and dangerous double earrings! What kind of a heathen would dare to wear two earrings and expect to make it back to god.

Chalk this up as just another "commandment" for the faithful TBM to obey. The church will control EVERY aspect of your life if you let them.

If earrings are the only dangers that a true prophet can actually reveal, then NO FUCKING THANKS!

The more they try to dazzle their members with their powers of revelation, the more the outside world looks at them and just shakes their collective heads in amazement and disbelief.

Serously, how could anyone actually believe that this nonsense is revealed from god! The more they play their "prophet" roll, the more they expose themselves to the world.