The Tragedy at Sandy Hook

In light of the Sandy Hook shootings, I am amazed how the community has blamed this tragedy on the "godless". 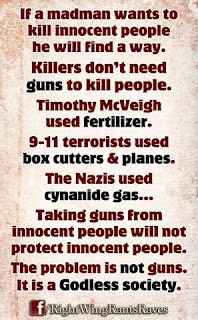 This angers me!  This is wrong!  To blame our society's problems on the "godless"!  First of all, religious people DO ALL SORTS OF EVIL THINGS ALL THE TIME!  Secondly, the godless of this nation are an overwhelming minority.  Only about 5 percent of the population claims to have no god in their life.  Are you honestly telling me that god allows 20 innocent children to be slaughtered because of that 5 percent?  I've said it before, and I'll say it again, that is no god that I will ever worship!

What we need to do is stop relying on our imaginary friends to solve all our problems for us and start taking a little action.

While this is a tragedy, I have not read or heard one kind thing said about the shooter.  He was obviously a very distrubed person, who just needed love.  And in the wake of this tragedy, all that is said about him is how evil he was.  THIS IS THE PROBLEM!  Our society has responded to this person with anger and hatred, when it should be an out pouring of love on him and his family.  I have no doubt that god-fearing Christians contributed to this tragedy by judging this young man all his life and telling him how puny and unworthy he was.

So while this nation turns to "god" for comfort, I think it is only compounding the problem.

We live in a society that wants to deal with the symptoms of a problem rather than the problem itself.  We would rather respond once a tragedy occurs than take the steps to prevent it by making sure that every child receives the love they deserve.  But this young man was shunned and pushed away by this society until it drove him to commit horrible things.  And while the 27 deaths is tragic and sad, the true tragedy is that we allowed this young man to get to the point where he felt that this was his only course of action.  He did it to get the attention he so badly needed.

So while our "god" society blames his "godlessness" for what he did, I blame the god-fearing people of this nation for putting it into the hands of "god", which is to say they ignored the problem and did nothing!

It has been said that the person who needs love the most, deserves it the least.

So I predict that we will see more and more of this type of thing happen, because the people of this country just want to point fingers at someone else.  They want to cry over how sad it all is, point fingers at the ones who don't believe in their imaginary friend, and then turn around and let it happen again and again!

The part that truly stumps me is how they all turn to god for comfort when this type of thing happens, when god allowed it to happen.  Their all-powerful god could have stopped this deranged killer.  God did nothing to prevent it, and yet they praise him all the more for his goodness and mercy.  I don't see a merciful god... I see a society living in a delusion that their invisible god gives a damn.

The true tragedy is this delusion.  This dream world.  These kinds of problems will stop once we collectively unplug ourselves from it and start taking accountibility for our own actions.  Oh, and giving out a little bit of love instead of judging everyone who isn't just like us.
11 comments: