M411 Takes A Leave of Absense

Mormon411 is displeased to announce that, effective immediately, because of some circumstances beyond his control, he will be unable to blog for a while.  This includes responding to comments and emails.  I wish it wasn't this way and I hope to be back soon.  It might be several months or maybe just a few weeks.  Let's hope the latter.

I will be back, promise.  Just not sure when.
4 comments:

I have an idea. Let's try the religious way of proving atheism is true and that un-god is the true un-deity (the non-existent god of atheism).  Hey, it works for them so why wouldn't it work for us? 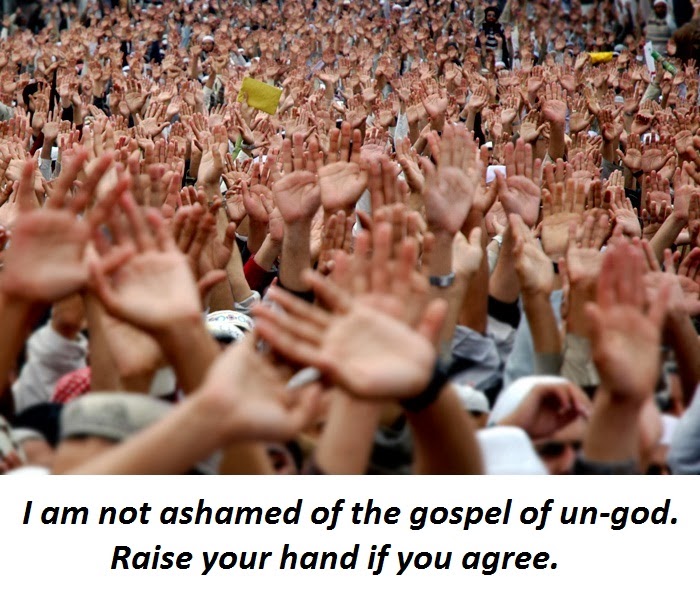 About a week ago, I had an inflamed gum.. I was worried it might develop into an infection or a toothache.  I flossed, rinsed with mouthwash, and un-prayed to un-god.  It went away!  I didn't need a doctor or a drug.  Therefore, atheism is true and un-god healed me.

It seems that in my daily experience I come across the numbers 411 quite regularly.  Sometimes it's the time, sometimes it's my score on a game, sometimes it's a page number...  Whatever it is, it must be a sign because I see it a lot.  Therefore, Mormon411 must be un-god's favorite atheist blog.

I was driving one time and felt like I should slow down.  I did and passed a cop watching for speeders.  If I hadn't listened to the prompting from un-god, I would have got a speeding ticket.

I needed a job.  So I went out and I filled out dozens of applications.  I busted my butt and finally got hired.  Praise un-god!  I did all the work, but un-god gets all the credit.  Un-god helps those who help themselves.

One time I got sick and needed a surgery.  So I went to a hospital that employs doctors and surgeons who have had many years of study and training.  I un-prayed.  My surgery and recovery were a complete success thanks to un-god.  He heard my un-prayers.  The doctors had nothing to do with it.

Un-god is my creator so all those blasphemers like Moses and Isaiah ceased to exist when they died.

Un-god hates all the same things I do.

I am a true prophet of un-god.  Therefore, anything I say is the will of un-god.  He wants you to pay me a lot of money and do everything I say.  He wants me to have sex with your daughters (and your wives if they're hot).

I almost drowned as a kid, but someone saved me.  Good thing un-god was there.  The person who saved me doesn't believe in un-god.  Heathen!

When I was trying to upload the picture for this post, my computer was being stupid.  Therefore, un-satan must be trying to stop this work.  Un-satan is un-god's nemesis and immortal enemy.  Un-satan doesn't want you to know about un-god.  If you are not with un-god, then you are against him.

Un-god is totally logical.  He is everywhere and nowhere.  Although you can't see or hear him, he is there.  It doesn't matter if you don't believe in un-god; your disbelief doesn't change the fact that he really exists!

My neighbor got a flat tire.  That's because he doesn't believe in un-god.

I got a flat tire.  That's because un-god is testing me.

My neighbor who doesn't believe in un-god found $100.  He just got lucky (I suspect he might believe in un-satan.  Un-satan is fooling him into a false sense of security by providing false miracles).  He used it to buy a new tire.

Un-god really wants me to convert my unbelieving neighbor.  I'll make cookies for him and pretend to be his friend.

The will of un-god is absolute and unchanging.  So un-praying makes no difference at all.

Un-god doesn't really care what you do with your life as long as you believe in him.

All the school shootings on the news and the bad storms across the country are un-god's way of trying to get the focus back on him.  Somehow, he thinks violence and misery is how that should be done.  I don't question it though; un-god knows what he's doing.

Un-god teaches that we should be good because we want to be, not because we are afraid of un-hell.

When I first heard about un-god, I felt good.  That's how I know atheism is true.  And you can never convince me otherwise, no matter how much faith you throw at me!  Un-god told me you would try to convince me he isn't real.  He said you'd say he's just a figment of my imagination.  I can't see him and openly admit there is no actual proof he exists, but that doesn't make a difference.  I don't trust anyone but un-god.